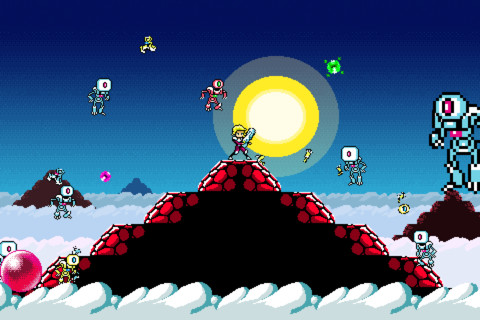 Ziggurat is the end of a much longer story -- a story which ends with The Last Human On Earth standing atop a stratosphere-high stone pyramid, wielding a laser rifle against an endless wave of relentless alien freaks.

Where did the alien freaks come from? How did our hero get to the top of this pyramid? We have no time to think about such things: there is only time to shoot.

The situation is hopeless: this is the end. Your only goal is to enjoy taking out as many of those alien freaks as you can.

As the aliens jump up and down in their approach to our hero, their eyeballs grow and shrink. As you hold your finger on the screen to steady your aim, your gun’s blast grows and shrinks. Hit larger enemy eyeballs with larger bullets to initiate larger explosions and chain reactions. Shoot as much as you want -- you’ll probably never get enough, and that’s okay, because the enemies will literally never stop coming.

With controls that bring together the best of modern shooting nuances and classic gaming challenge, Action Button Entertainment's ZiGGURAT is a new kind of addiction for iOS.
Ziggurat Game
Posted by Mobile Apps Review at 6:37 AM