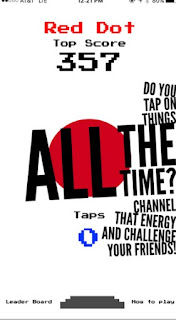 Developer James McGarry has come up with a wonderful tool in the form of an app for Apple's iOS users that channels tapping into an entertaining and exciting game.

Named as RedDot Tap, the app is made available on iTunes under Games category and is said to be one of the greatest ways to concentrate. It is the best way to break lonliness while waiting for a train at railways station, for a bus at a bus stop or at a clinic and waiting for the doctor to reach. It kills boredom at home too. The app is best to boost up creativeness and sharpen the brain.

The game is rated at 4+ on iTunes and the developer claims it to be compatible with iOS 10.3 or later devices - iPhone, iPad and iPod touch.

The developer has priced tagged RedDot Tap app at $0.99. It is the first version and consumes storage of just 18.3 MB to download and install on the mentioned devices.

It was launched on 20 June 2017, just recently, and supports English language to make the game understand by more and more people.

RedDot Tap is learned from users and critics to be highly addictive game that channels the energy and challenges friends too. 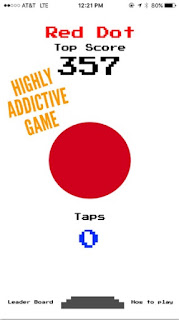 The app is simple and sweet with no music, no images and no animation. Players just need concentration to the tap the red dots more and more with the target of scoring the highest among friends or groups.

Each level of the RedDot Tap has more challenges and seeks faster movement of fingers to tap the dots in great number.

The app is for any age group as it is equally simple for elderly as well as for the kids. It improves the creative talent of users and boost up thinking level at faster speed. The game helps in rationalizing things at hand in quick access.

As the game is less than a month old, not much has been heard from real players about the experience or any bug. The game is expected to soon get an update to enhance the playing and introduce some more exciting levels to keep luring more potential users.

RedDot Tap is undoubtedly a good game and with time can prove to be the best one in simple and easy games segment. It is a new way to keep users engaged for hours without head scratching and without strategies while playing.