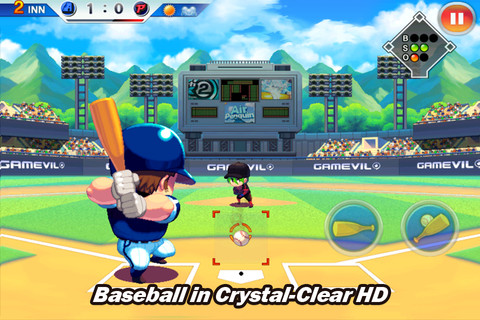 Step up to the plate for the best baseball experience on the App Store, now looking better than ever before in crisp HD! The sky's the limit with level restrictions unlocked, upgraded batting and pitching moves, endless customization, new super players and more play modes. Whether managing a team to the championship or training a rookie to the Hall of Fame, you're in control of it all.

EXPANDED MY BATTER & MY PITCHER MODE
Train to earn skill points, new special moves and stat-boosting nicknames as you rise from rookie to Superstar.

NETWORK MATCHES
Go up against other users' teams around the world in PVP matches.

COLLECT SUPER PLAYERS, ACHIEVEMENTS AND MORE
Meet the challenges of new super players to have them join your team. Go after the multiple story endings and over 30 Game Center achievements. Baseball Superstars 2012 Game
Posted by Mobile Apps Review at 3:05 PM