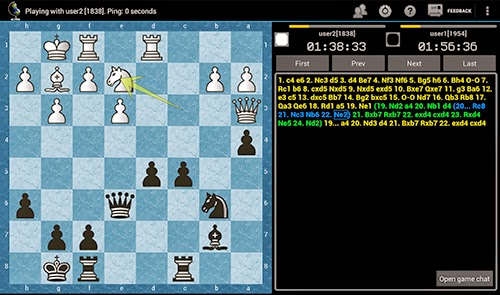 To be perfectly frank, I never thought it would be so difficult for developers to come up with a genuinely enjoyable and great chess game for Android.
There are thousands of them doing the rounds and millions of players looking for them, but nine out of ten times you’re left with a poor attempt at an app that seems to overlook the simplicity that makes chess what it is.
Does Chess OK break the mold? In a word…yes! Overcomplicate a chess game with too many distractions, flashing lights and unnecessary garnishes and you ruin it. Seriously – there’s a reason why chess boards aren’t neon colored and loaded with LED lights, which is that they do nothing for the game. And that’s where the appeal of Chess OK immediately leaps out – the gaming board you’re presented with is as simple as it gets and…as you may know by now…simple means no lagging, no hanging and no problems for even the most modest of Android devices. Chess ChessOK Playing Zone PGN Review
Posted by Mobile Apps Review at 11:50 AM